Where does the journalist look for newsworthy stories? Where does the future of journalism lie? These are two areas of exploration that Raffles Press’ annual Inter-JC Conference, Pressing Ahead, seeks to uncover in greater depth.

Against the backdrop of the world’s largest newspaper publications venturing into multimedia journalism, how we, as student journalists, can harness the power of photo, audio and video to supplement our craft, is definitely something worth contemplating and conversing about.

In her opening speech, Raffles Press Chairperson Mei Feifei (22A13A) introduced the theme of this year’s conference: Through the Journalist’s Lens. To remain relevant, journalism — and student journalism in particular — has to adapt to the digital landscape.

In order to understand how journalists navigate the diversity and versatility of modern media, Pressing Ahead invited highly esteemed journalists Mr Ken Low and Mr Mark Cheong to share their views. After their sharings, which inspired us to let our passion guide our journalism and to explore video and photo media, the conference proceeded with student sharings about the journalistic experience across different schools and the challenges of student journalism.

With full hearts, we embarked on this exciting journey for journalism.

Working Through a Videojournalist’s Lens

Our first speaker, Mr Ken Low, is a correspondent for Lianhe Zaobao’s digital content desk. His 2021 video series, Cycle with Zaobao, was awarded ‘Best Use of Online Video’ at the Digital Media Awards Asia 2021. Fittingly, he shared about the unique methodologies of the video medium, and how he engaged people in his work.

Mr Low sustained a casual, conversational tone throughout his sharing, entertaining us with several anecdotes.

“How are you going to convince middle-aged men that BTS are good looking guys? It’s not just about the looks, it’s the music and it’s the fandom, but how do you convey that to a 40-year old man?”

The first part of Mr Low’s sharing focused primarily on recognising one’s target audience. As he started shaping his vision for Zaobao.sg (Lianhe Zaobao’s digital platform), he was all too aware of the newspaper’s “old and traditional” image.

To remain relatable and relevant, he realised that their team had to not only adapt their own methods but also consider embracing a younger viewership. This meant staying acutely aware of how the information on their sites would be viewed by the different audiences on the digital platform and modifying their presentation accordingly.

“I literally cried because I spent so many hours looking through the footage.”

The onset of modern media also meant a shift from radio to video. Mr Low’s debut in the media industry was as a music director at local radio station UFM 100.3, and growing up, his media palate consisted mostly of radio DJs. With changing times, however, he adopted the video medium to keep pace. Over the course of his numerous video projects at Zaobao, Mr. Low learnt about the differences between the two mediums — the hard way.

As he started to recognise the versatility of the video medium and the necessity of pre-planning in minimising shooting time, Mr Low established himself as a videojournalist, recently releasing season 4 of his Cycle with Zaobao series.

During his sharing, Mr Low introduced another challenge that he encountered as a videojournalist: incorporating paid product placements into his work. He shared unique insight into the issue of advertising from the perspective of a content creator.

“It’s very in your face; as a producer I hate it, but I also know my company needs the money.”

This candour was characteristic of Mr Low’s sharing. Throughout his talk and the Q&A segment, he maintained a conversational tone and engaged us with his easy humour.

Storytelling Through a Photojournalist’s Lens

Our second guest speaker, Mr Mark Cheong, is a photojournalist based in Singapore who picked up photography at the tender age of 17, using it as a form of journal taking before starting his career at the Straits Times back in 2012.

As a seasoned journalist who has done news coverage of significant regional events such as the Myanmar elections, Malaysia protests and death of the Thai King, Mr Cheong kicked off his presentation by sharing about photo stories.

In particular, he emphasised the importance of choosing an appropriate and story-suiting medium for projects and campaigns, adding that whilst content digitisation has become the vogue at present, the print medium is still capable of conveying messages effectively.

Moving onto the topic of journalism ethics, Mr Cheong highlighted the importance of seeking consent when covering more sensitive and personal photo stories. “The last thing you want to do is to make the subject uneasy… so it is very important not to lie to the subject”, he said.

Wrapping up his presentation, Mr Cheong underscored the values of earnesty and empathy in journalism. “No story is worth being an asshole over”, he quipped. 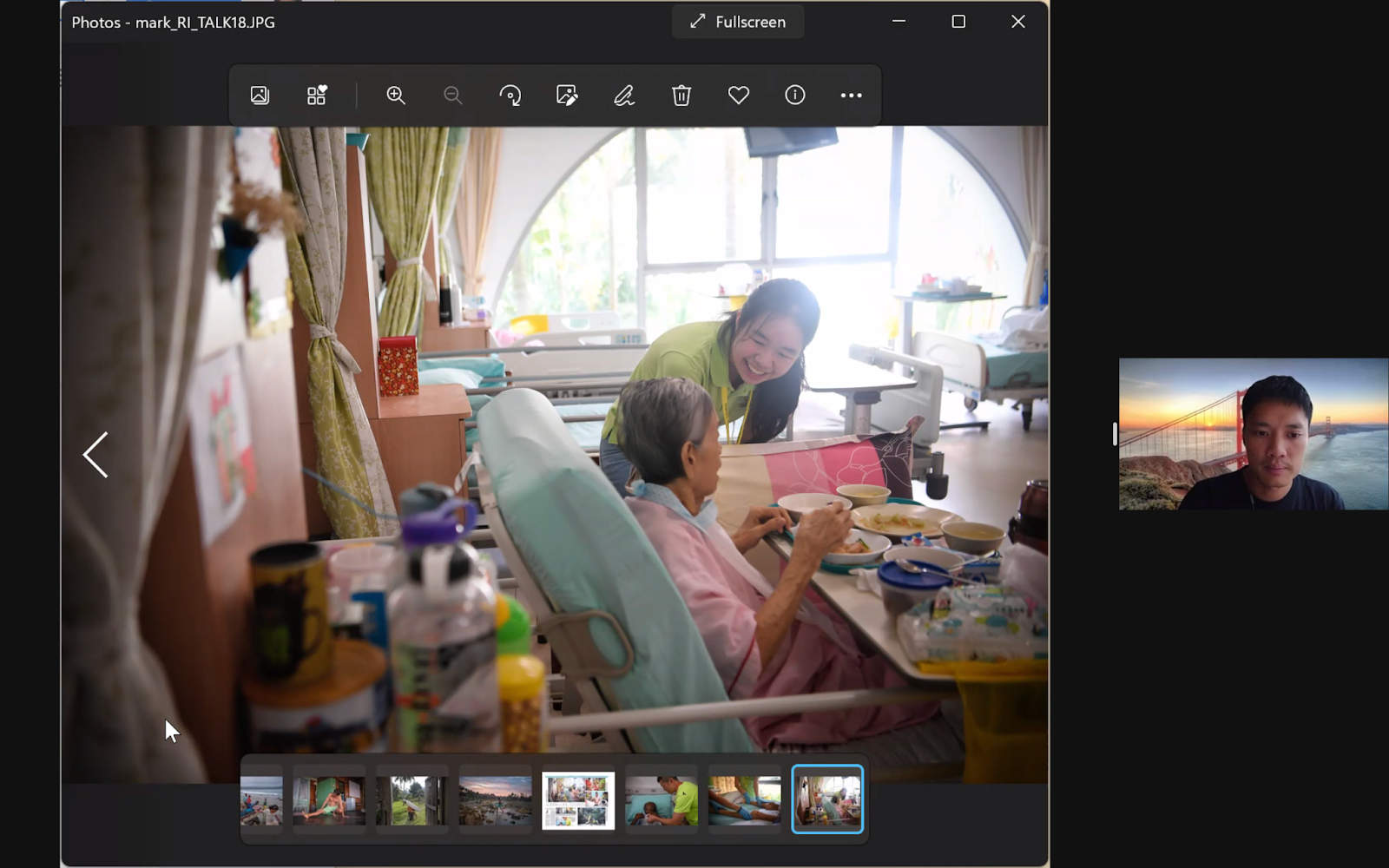 A poignant photograph demonstrating sensitivity towards the photo subject through the adroit use of angle and positioning.

On top of his informative presentation, Mr Cheong also shared his valuable insights on maintaining a professional and healthy psychological distance from his subjects during the Q&A Segment. In his words, a fundamental principle to keep in mind is that “You are human first, photographer second”.

When asked about tips on taking good photojournalism shots, he stressed the need to set context to each picture — after all, photojournalism is not about “posed shots” or “fashion photography”. He also added that “seeing the good shots takes a lot of practice as well”, encouraging us to watch how other photographers work and manoeuvre, and not be afraid of trial-and-error.

Group 7 from Cross-Island Impressions (an initiative for collaboration among student journalists in Singapore) shared about the thought process behind the interviews for their article.

Because their topic concerned journalistic groups in various schools, they wanted to get insight from multiple groups: average students, their friends, and the ExCo members of the journalistic groups. They were challenged by the need to consider what these different groups would – and could – share on the issue of student journalism.

Eventually, they managed to curate the different perspectives to offer their readers a balanced and authentic insight into student journalism in their schools.

By staying open and “responsive to [their editor’s] feedback” (as quoted from their editor, Mirella herself), Group 7 also made the experience more enjoyable for everyone involved.

The next group, Group 1, shared about their ideation and research process, specifically how they had to re-evaluate their article content and revise their angle after their initial idea was rejected due to its controversial nature. Eventually, they decided to switch their article focus to migrant workers in the hopes of dispelling stigma and exploring a different narrative.

The student presenters also touched on some of the hiccups and challenges faced, as well as their biggest takeaways. We can’t agree more with their reflections that “student journalism can break convention and spark legitimate discourse on topics frequently swept under the rug”.

A diagram illustrating Group 1’s thought process in narrowing down their choice of a marginalised group for their article.

We are also once again reminded of the immense potential of student journalism in amplifying minority voices and shedding light on issues often trivialised and brushed aside by society — but of course, this has to be done in accordance with a code of ethics, a cornerstone of journalism.

The journalist’s lens illuminates journalists and audiences alike. As we shape the future of journalism we want to see, we hope to remain acutely aware of the power we hold when we offer the world a glimpse through our lens.

4239040cookie-checkPressing Ahead 2022: Through the Journalist’s Lens no