The Roaring Twenties was heralded by a flourishing economy and a blossoming of arts and culture in the West. It was an age of celebration, a recognition of all the strength it had taken to live through the previous (and far more tumultuous) decade. The Great War had ended, the influenza pandemic of 1918 had died down, and people were left with the desire to do one thing— live.

About a century later, we found ourselves living that same reality, finally recovering from a global pandemic that had forced us all into isolation. Literature Week 2022, while centred around 1920s literature, also inadvertently parallelled this— our very own Roaring Twenties.

At long last, however, the fog was beginning to lift. It was once again time to celebrate the beauty of life and Literature together. And so, Lit Week began.

The first official event of Lit Week was a talk on Tuesday by Raffles alum and poet Ms Amanda Chong, who spoke about the intricacies of confessional poetry.

The talk was held during the Humanities Programme’s Combined Civics period at LT6, though all Literature students were welcome to join. Ms Chong took students through several of her own poems, calling on people to offer various interpretations and explore the beauty of poetry’s impact on the individual. 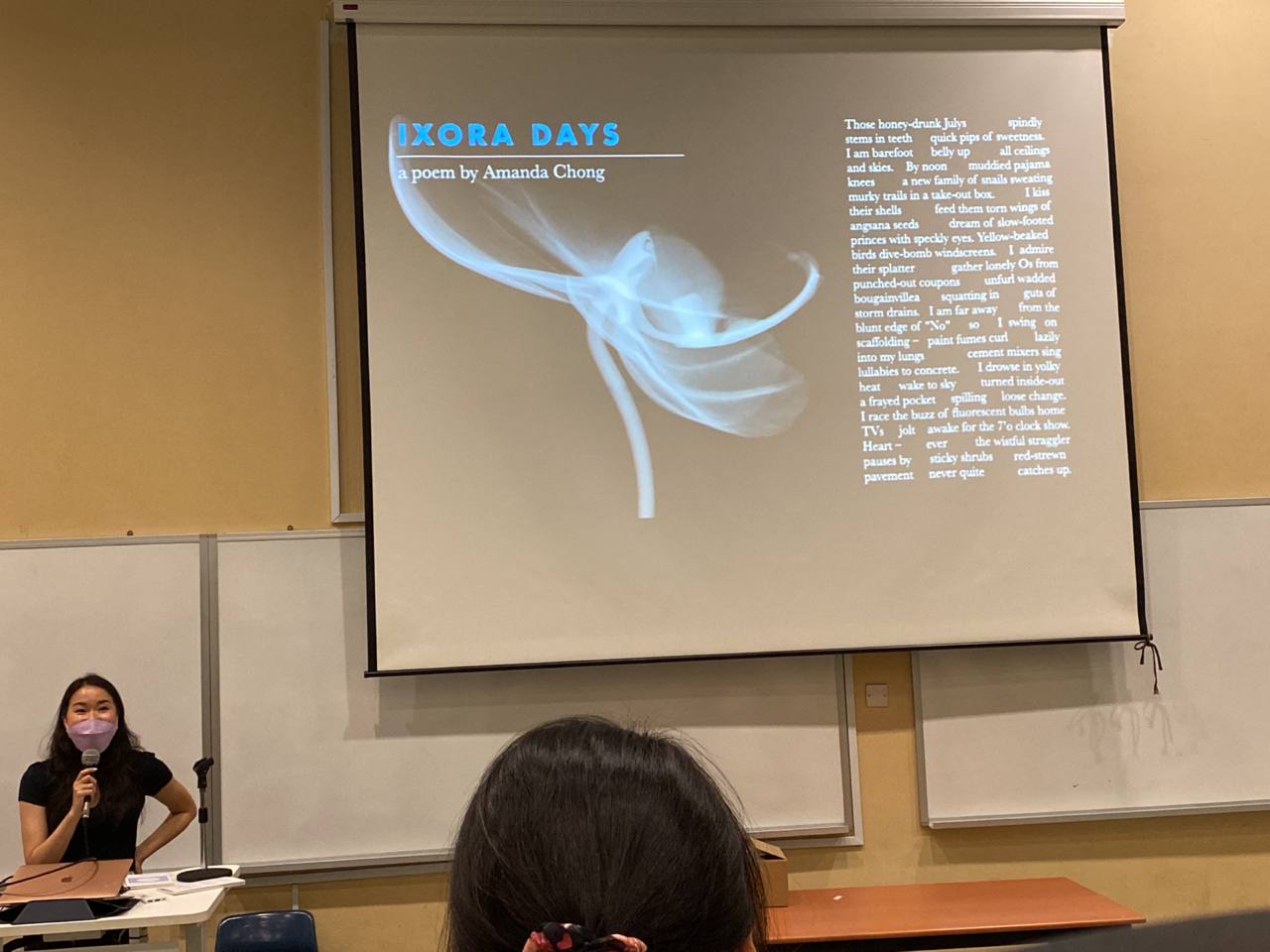 The visit ended with a sale of signed copies of Ms Chong’s poetry collection, Professions. 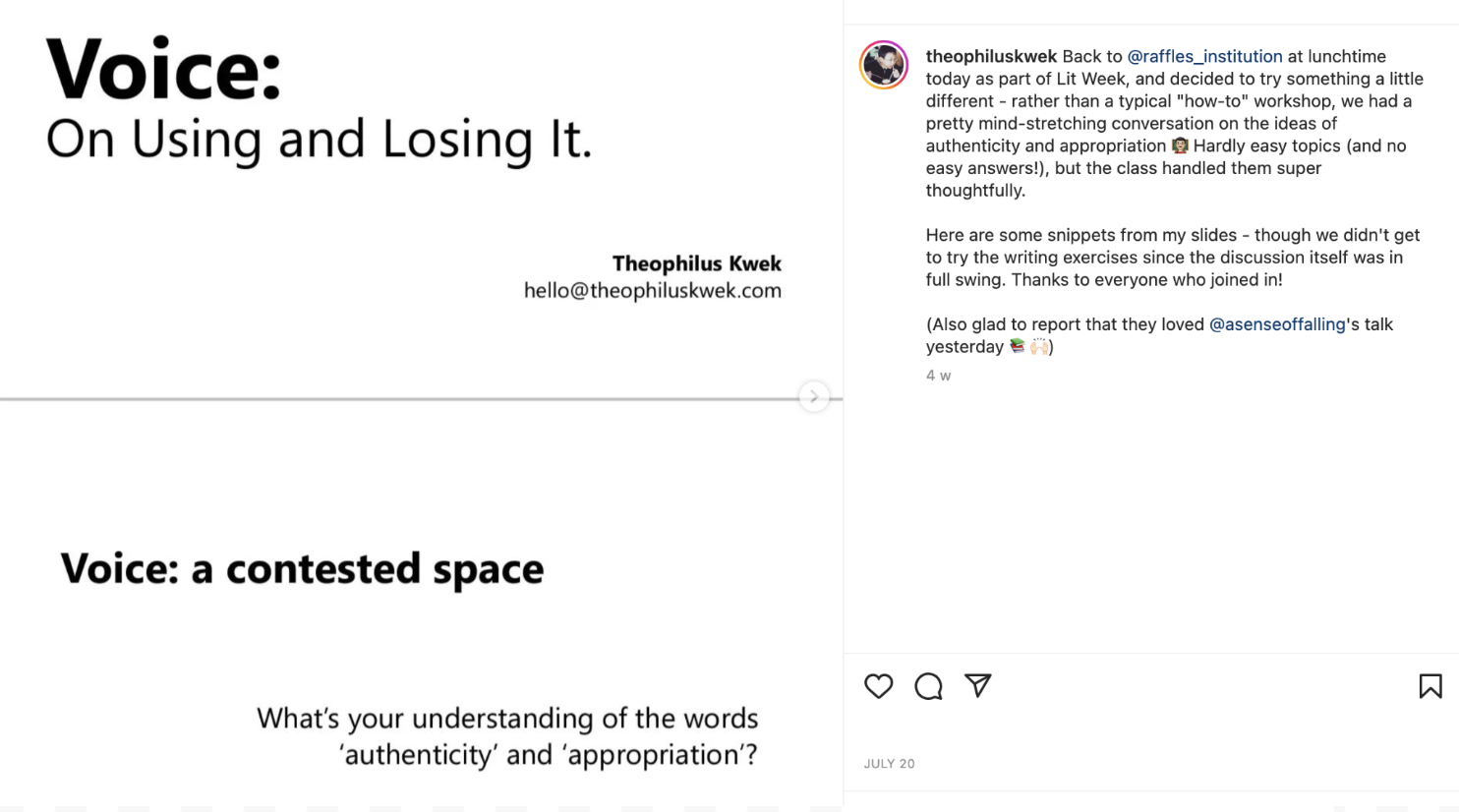 Held on Wednesday, the workshop revolved around the ethics of using another’s voice in poetry – was it acceptable, for example, for a Chinese man to use stereotypical elements when writing from the perspective of a Filipino domestic helper, as in Joy by Tse Hao Guang?

Participants were encouraged to share their thoughts, and a lively discussion was conducted.

Another activity planned was the poetry gallery set up at the canteen. Popular poems from the 1920s were selected to be analysed, including The Waste Land by T.S. Eliot, 1916 Seen From 1921 by Edmund Blunden, and Sailing to Byzantium by William Butler Yeats. Students were encouraged to pen down their own interpretations of each poem using the post-its and pens provided. 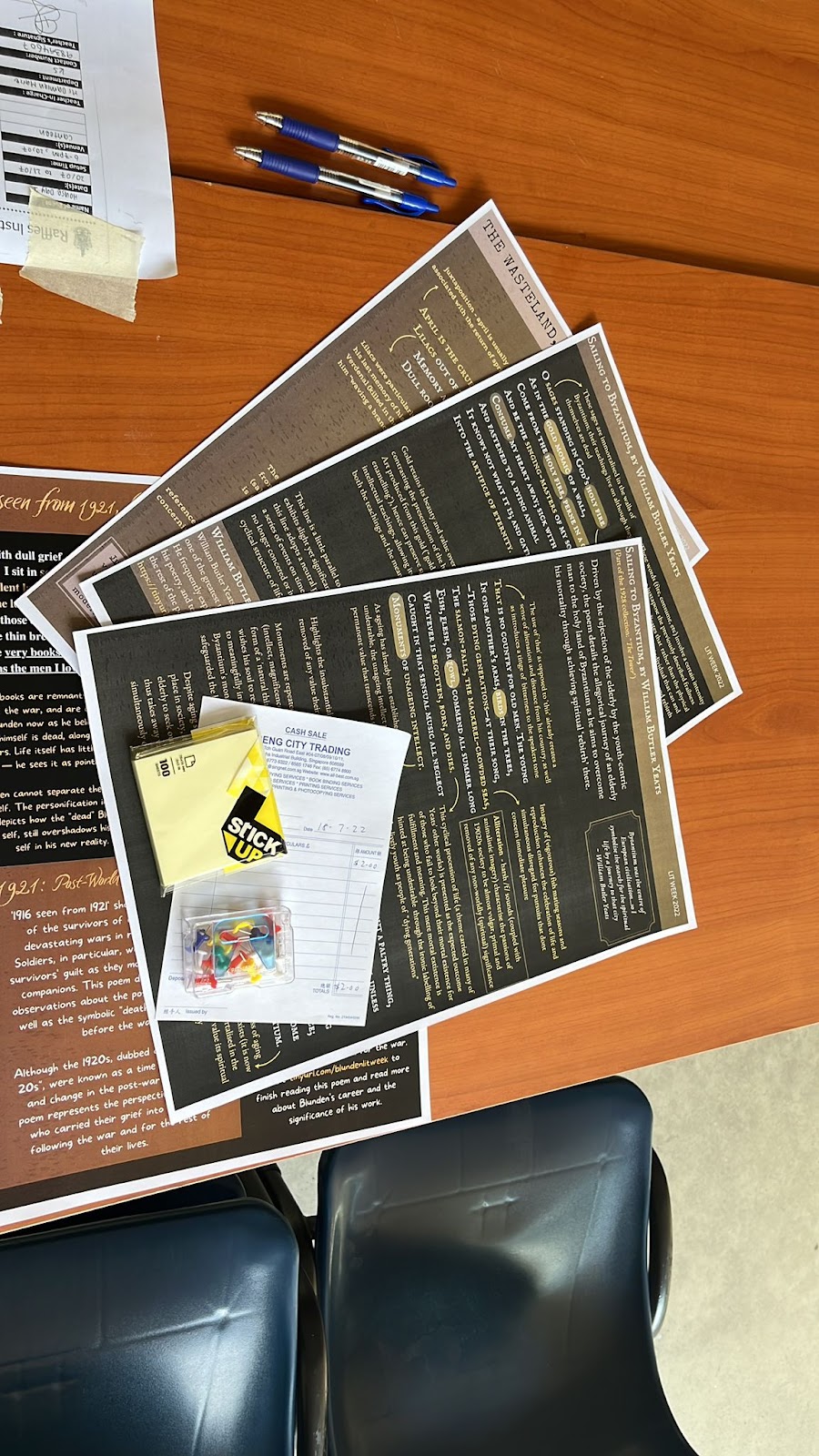 The Organising Team had also arranged a writing competition where students could submit their own creative writing pieces in accordance with the theme of ‘The Roaring 20s’. The written works could be poetry, fiction or nonfiction prose, and were entered into a competition, the winners of which were announced during Lit Evening.

All submitted pieces would be compiled into a physical anthology, which students were given the chance to sign up to later receive a copy of during Lit Evening.

At 4 p.m. on Thursday, the Lit classes began filing into the PAC, some of them still fussing over last-minute outfit changes for the Costume Parade, some disappearing backstage to prepare for their poetry recitations. As the lights dimmed and a hush came over the crowd, emcees Saara Katyal (23S05A) and Svanika Vivekanand (23A01E) came out to greet the classes. 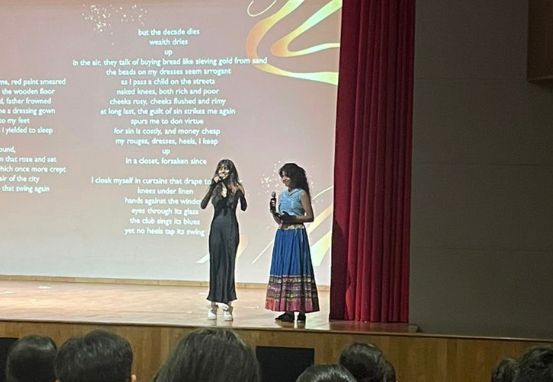 The evening began with an anticipatory silence as the audience awaited the night’s first event – a spoken word poetry recital. Volunteers could choose to perform their own poems, pre-existing poems of their choice, or poems provided by the OT. 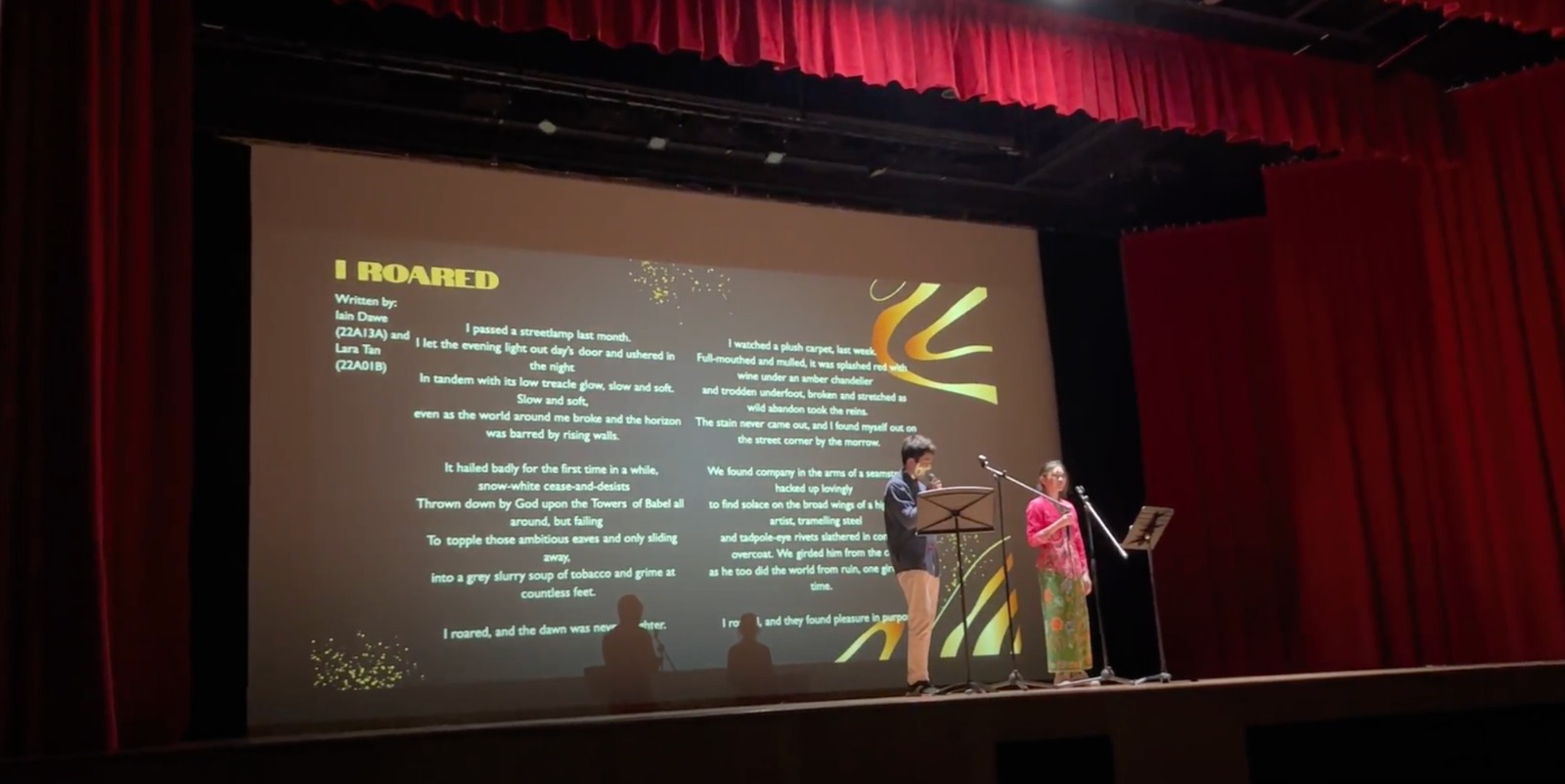 Following the engaging readings, it was time for each class’s models to show off their impeccable fashion sense by competing in a costume parade.

“Call me Joan, ‘cause my fit’s on fire!” quipped Svanika, and indeed, the same could be said for those standing on stage.

Classes had adorned their models with costumes that paid homage to their A-Level Literature texts. Inspired by The Great Gatsby by F. Scott Fitzgerald, there were costumes for Jay Gatsby’s car (23A01D), Daisy Buchanan (23S0367X), Jay Gatsby himself (23A01F), and most illuminatingly, the green light by 23A01E.

For Saint Joan by George Bernard Shaw, the audience was greeted by an ostentatiously-robed King Charles and a winged Saint Joan from 23A01B. Out came another Saint Joan, this time from 23203C, donning a pair of red wings as an ode to the play’s use of avian imagery for Joan.

Lastly, for Pride and Prejudice by Jane Austen, not one, but two most eligible bachelors of the ton were presented, dressed as none other than Fitzwilliam Darcy. 23A01A’s Darcy tucked a king chess piece on his ear, representing the character’s strategic wit, while 23A01C’s held a rose between his teeth, symbolising the character’s capacity for romance despite his cold exterior, as elucidated by Li JY (23A01C).

It was a tough call for the judges, but ultimately, they decided on the “mesmerising” (as decried by Mrs Nicola Perry) green light by 23A01E5A, with 23A01D’s cardboard car a close second.

The last segment of LitWeek Evening was a three-part inter-class game show. Three representatives from each class were sent up on stage to take part.

The first part of the game show was a quiz to guess the prices of household items in the 1920s. “It was a very thought provoking experience where I realised I had no concept of money,” Lim Tze You, one of 23S06A’s representatives, admitted good-naturedly.

The second part of the game show involved a Quiz Bowl-style trivia round, where the representatives were tested on their knowledge of RI, RGS, and O-level Lit texts as well as a few well-known works from the 1920s. 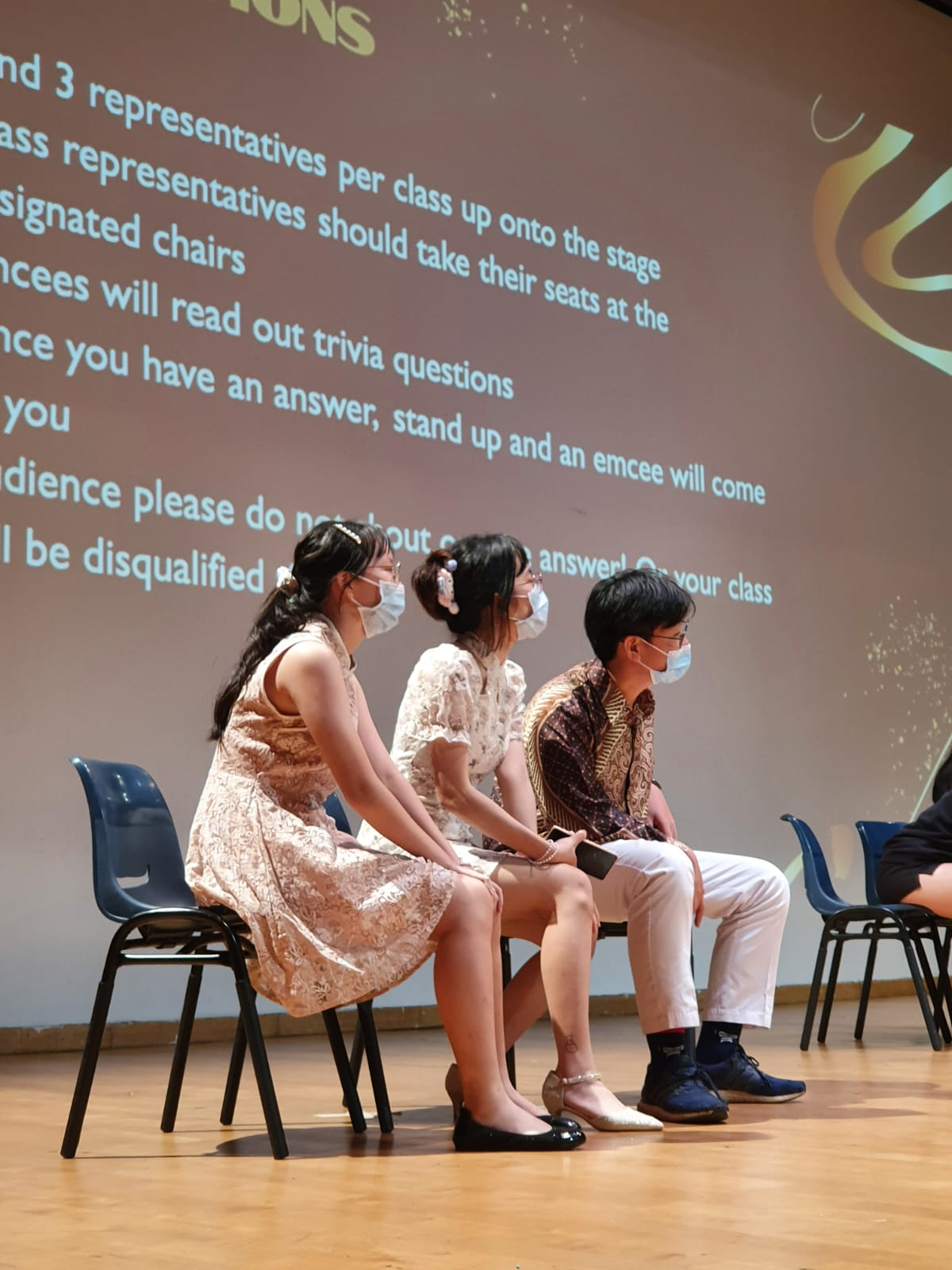 “I’ve always had a propensity for remembering a ton of information that never benefits me in my daily life and Raffles Quiz Bowl let me experience the high of actually using it,” explained Saara Katyal (23S05A), who organised this segment of the game show. “I decided to take [Lit Week Evening]  as an opportunity to share this with my fellow Literature takers.”

Lastly, the game show ended with a game of charades, where classes came forward to act out the prompts for their representatives on stage. The prompts ranged from popular literary characters to iconic actions such as Caesar’s assassination and movies including the widely acclaimed Minions: The Rise of Gru.

The only constant in life is change.

Heraclitus (tr. undesirable as it may be, all good things must come to an end.)

Lit Week this year was a welcome reprieve from hectic school life. The organising team had succeeded in lifting our spirits and reminding us all why we had chosen to take Literature in the first place. It is the pure joy of being part of a community that loves to analyse and create, and the excitement that comes from sharing ideas and thoughts that brings us all together in an academic journey made all the more enjoyable.

And so with sunshine and the great bursts of leaves growing on the trees, just as things grow in fast movies, I had that familiar conviction that life was beginning over again with summer.

The Orphan, written and performed by David Lu (23A01B)

TOP WINNER: the great gatsby but everyone is an #influencer except nick bc hes lame by Claire Jow (23A01B)