We have all at least once pondered the question: “What if?” What if you’d done things differently? What if you went back to that crossroad and chose the other path, if you’d said something else, if you knew then what you know now?

Or, to put things differently, what if we’d all had greater foresight during those first few months of 2020 — would we have been able to mitigate the pandemic’s effects? Even more emphatically for those of us mourning the loss of overseas trips, what if we were able to plan for the lifted restrictions in 2022 last year?

The theme for this year’s Singapore Writer’s Festival (SWF), celebrating its 25th anniversary, is one replete with regret and possibility: “If”. It is aptly named, as we are all standing at the intersection between our past decisions and our uncertain future.

[SWF] for me has always been about marking its time and history.

At the media launch for the festival, Nansi recounted SWF’s past— having started as “an initiative for writers who thought there wasn’t a space for writers”, the scale at which it is conducted today is a testament to how far the arts scene has come, and how far it can still go.

Featuring over 200 programmes, this year’s edition of SWF promises an array of new and exciting experiences while paying homage to previous years’ traditions. Looking ahead, we then wonder: what if you attended SWF this year, and what if you had a marvellous time doing it?

The closing debate has always been an audience favourite in past editions of SWF. However, in a spin on tradition, this year’s festival will feature an opening debate, with eight speakers battling it out on the motion “This House believes that the remake is better than the original”. With the likes of Amanda Chong, Joshua Ip, and Adrian Tan, this is bound to be a night of comedy and laughter. 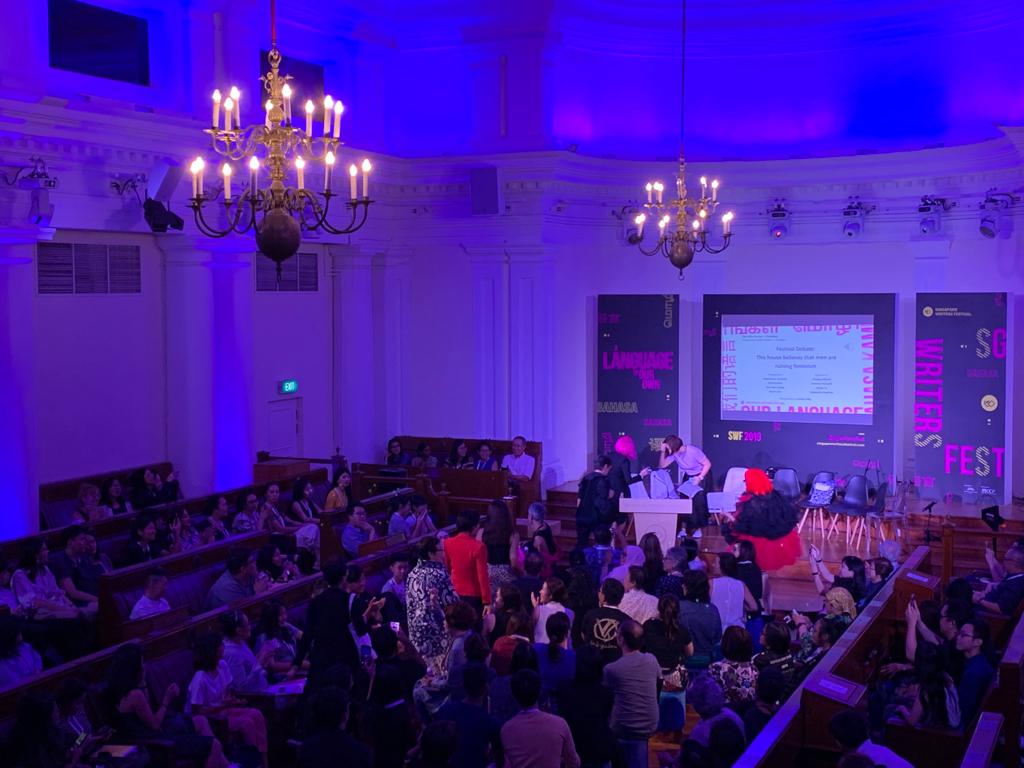 The closing debate at SWF 2019, deemed by the debater among us
to be the “funniest he has ever watched in his career”.

Additionally, SWF will showcase the interactive audio-visual installation titled If We Paused in Mid-Thought…, which prompts viewers to consider the question, “What would a world made for you look like”? Visitors can contribute their own sentences to the installation and watch an unfolding textual narrative evolve over the course of the festival. This will then culminate in the festival’s closing event …Only to Arrive at the Same Place Together, a live poetry reading in response to this installation.

Of course, the heart of SWF is the Festival Village located on Anderson Bridge, a newly-pedestrianised space used for the very first time. Situated close to other festival venues like the Arts House and the Asian Civilisations Museum, this communal space will be abuzz with book launches, performances, and programmes. The best part: entry to the Festival Village will be free for all members of the public, even if you have not purchased a festival pass.

As a multi-lingual literary festival in Singapore, SWF boasts an array of cultural programmes that celebrate the works of Chinese, Malay, and Tamil writers. Chinese lovers can enjoy a bilingual conversation on Jin Yong’s wuxia novels or attend a novel writing workshop by Chen Shuai. You can also indulge in a quiet evening of poetry and tea at Tea Chapter: the event features Ms Mu Jun, which might be a familiar name if you came from RGS! 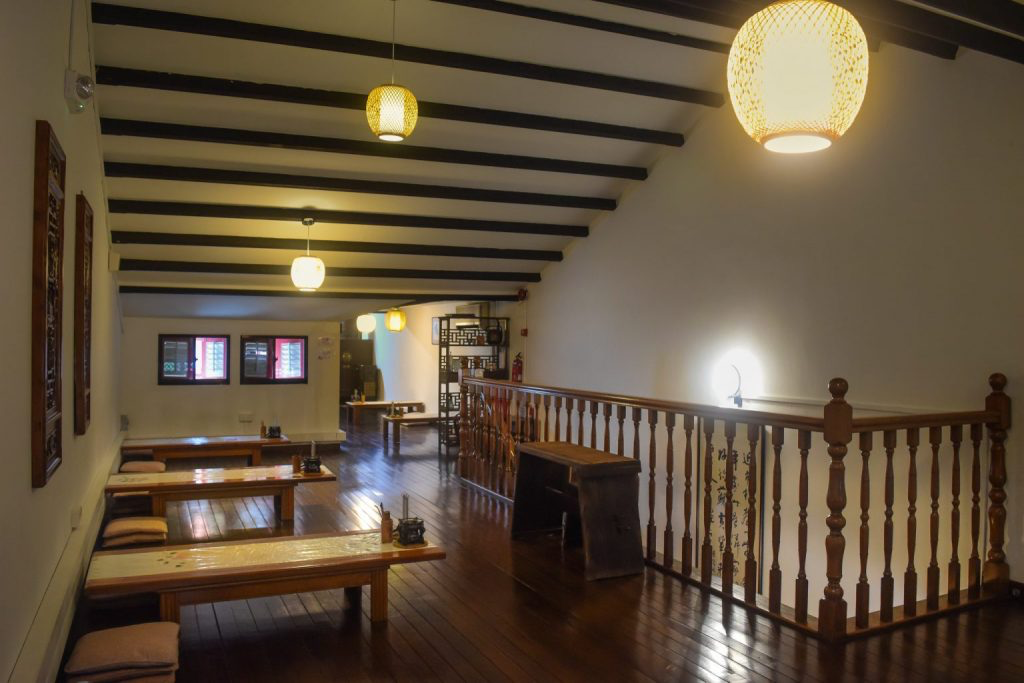 For those who appreciate Malay literature, SWF has organised the Literary Pioneer Exhibition, which spotlights writers including Raja Aisyah Sulaiman, Adibah Amin, and Dr Hadijah Rahmat. You can also look out for BEBAS, a showcase featuring women writers performing their work together with an all-female band. 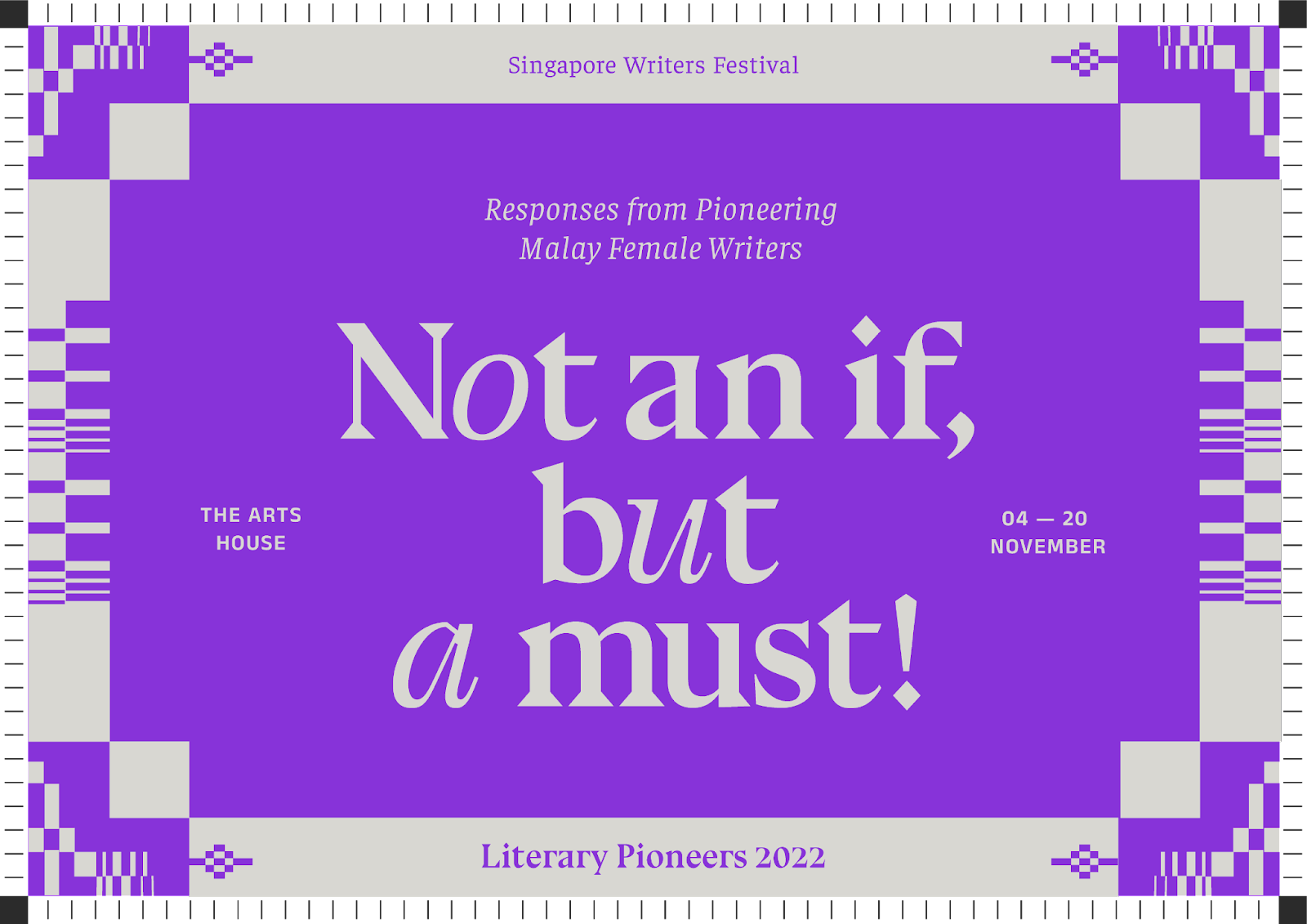 Key visual for the Literary Pioneer Exhibition, where designers were inspired by the “garang attitude of female Malay writers”. (Arts House Limited)

Exciting discourse awaits Tamil enthusiasts, firstly on Tamil YA Fiction in a programme titled ‘Teenage Dreams’, and secondly on how Singapore’s food culture enriches Tamil literature. If you ever wondered what literature without the memories of colonialism would look like, or if you were dazzled by the recent film adaption of Ponniyin Selvan, speculating about the course that local Tamil historical fiction would have taken if not for WWII might interest you.

There’s also exciting news for Francophiles: on top of celebrating Singapore’s local cultures, this year’s SWF includes a ‘focus’ on France, welcoming guests such as literature professor Pierre Bayard and filmmaker Atiq Rahimi. You can also look forward to screenings of films including Notre Dame du Nil (Our Lady of the Nile), which details ethnic tensions in pre-genocide Rwanda through the lens of girls in a Catholic boarding school.

If none of the above interests you, fret not! SWF entails more than discussions on books Literature students write essays about. You can also explore narratives in video games: Look Ma I Wrote A Game! is a workshop that enables you to dabble in video game writing, organised in collaboration with Ubisoft, the creator of well-known games such as Assassin’s Creed and Just Dance.

For manga enthusiasts among us, The Globalisation of Manga Style—a panel discussion featuring the likes of Indonesian comics artist Is Yuniarto, French-British comics scholar Bounthavy Suvilay, and Singapore artist Sean Lam—awaits. The panel will explore how the black-and-white storyboards and large, expressive eyes of Japanese manga have spread beyond the archipelago.

Finally, for football fans, this year’s festival includes sessions with two famous players. Lilian Thuram — the versatile French defender who played for teams including Juventus and Barcelona — will make an appearance, discussing the power of the beautiful game to unite and divide. Additionally, local footballing GOAT Fandi Ahmad will share his challenges and takeaways over his 40-year-long career.

What if… the end was just the beginning?

Of course, this is not all that SWF has to offer. Head over to www.singaporewritersfestival.com to learn more about upcoming events and book your tickets before 4 November! If you do purchase festival passes, which offer access to all events over the 2-week period, it would be financially prudent to look into the $15 youth passes.

We hope this article inspires you to partake in Singapore’s vibrant literary scene, and if we see you around, we’ll tip our hats in greeting.