For one, it has never actually been performed in the glamorous limelights of Broadway, or the West End for that matter. It isn’t a huge commercial blockbuster like Hamilton, neither is it particularly well-known to most musical theatre-goers.

First concocted by some university students at the University of Michigan all the way back in 2009, A Very Potter Musical—hereafter abbreviated as AVPM—is a hilarious parody of the Harry Potter universe. This ArtSeason, Raffles Players brought the magic to life in the humble Performing Arts Centre.

We were curious to see how the musical would translate, from its bawdy, intrepid form to a noticeably more sanitised and age-appropriate setting. Moreover, Raffles Players was also faced with the challenge of having to compress the three hour musical into half its original duration.

Even on the day itself, fate was not always in Players’ favour: the Performing Arts Centre’s lights and sounds system was perhaps so overwhelmed by the audience’s fervent reactions that it failed to deliver several soundtracks and lighting changes. Despite these hiccups, the cast and crew soldiered on.

Starting off alone in the limelight, Christian Low (23A01B)’s Harry Potter quickly established himself as the main character of the show, drawing the audience into his world.

His solo gradually crescendoed into the opening number, Goin’ Back to Hogwarts, as his fellow characters joined in the singing and dancing.

Of course, what Harry Potter story is complete without the second half of the dynamic duo—Ronald Weasley? David Lu (23A01B)’s Ron was a relatable, stalwart right-hand-man—“hold hand, not hold pen,” he declared solemnly to the audience during a scene with Hermione. Love confessions aside, Christian and David brought a unique chemistry to Harry and Ron’s bromance, more than convincing the audience of their sincere, years-long friendship.

The last member of the Golden Trio, Zhang Kexin (22A01C)’s Hermione Granger, proved herself to be more than just the “frumpy but… super smart” one of the group. While Kexin’s interpretation of the character held true to the canonical overzealous nerd that Hermione is, it also added a whole new dimension: violence.

This Hermione had by far the most physical scenes in the show. From her backhanding Draco and Ron, to her flinging pillows at Ginny, to her yanking Draco up by the collar and getting in his (her?) face, Hermione stood out as a #girlboss rather than as a teacher’s pet. (It’s no wonder Draco and Ron ended up singing an entire duet about “falling in love with Hermione Granger”!)

Where Hermione clearly asserted herself as more than your stereotypical bookworm and/ or Ron’s love interest, Ezann Ng (23S03J)’s Ginny seemed to differ in just that. She was first introduced as Ron’s “stupid/ racist sister!” and from then on never really appeared on stage again, until she got pillows thrown at her by Hermione.

It was thus a pleasant surprise to listen to Ezann sweetly deliver the opening sequence to Not Alone, where Ginny comforts Harry in his lowest moment. Ginny’s character arc was never really that complete, not even in the books, but this song managed to show Ginny’s transformation from a shadow of her brother Ron to a character in her own right.

The people that we did see constantly on stage were the ensemble cast, who played a host of characters ranging from the less important students like talented finder Cedric Diggory (played by Marcus Chu, 23S03L) to the Friends-esque Death Eaters. As with all musical theatre performances, they were the heart of the show—Iain Stewart Dawe (22A13A)’s Voldemort would never have been able to pull off his fabulous Rockettes-inspired dance otherwise.

Another fabulous Voldemort moment was any moment that he shared with Jack Jonah Kirkwood (22S06Q)’s Professor Quirrell. The two were, almost literally, glued at the hip for most of the play. Standing back to back, the duo provided endless moments of physical comedy—think scenes like them calling it a night and hopping into bed together.

Their dynamic was easily the most memorable in the entire show. Exhibiting arguably even more chemistry than some onstage couples, Iain and Jack elicited roars of laughter from the audience with their witticisms and banter.

“We had to get used to walking with each other,” shared Jack. “Also, I’m not good at physical contact, but [Iain] is really good at physical contact.” On top of having to keep pace with one another, they were “drowning in fabric” most of the time. It was only through blood, (a lot of) sweat and tears—plus an elastic band that was meant to hold them together but snapped in a rehearsal—that they delivered this iconic duo with so much success.

Another performer who captivated the crowd was undeniably Letitia Chen (22A01B), who illuminated the stage with her hilarious cross-dressing performance of the antagonistic, spoilt Draco Malfoy. A key rival of Harry Potter’s, Letitia played the role with unwavering energy, perfectly emulating Draco’s stuck-up, narcissistic personality.

On the very contrary, though, was Alexis Ang Bowie (22S03C)’s Dumbledore. Unlike the aged, wise professor as he was intended to be in the books, this Dumbledore embraced the irresponsible, rather biassed side that Potterheads had long accused the character of.

Relying mostly on hand-painted blocks for the set and props sourced from Carousell, the sets also captured the simple yet sincere spirit of the original low-budget college production.

Apart from the conventional elements of any drama production, we were intrigued to see how Players would deal with the musical aspect of this performance. Where singing was concerned, the cast’s performance was respectable, especially given a lack of proper vocal training, with some actors displaying stronger senses of musicality than others.

Although all actors did sing live, Players had also provided backing tracks to accompany the singers and ensure they could be heard in the densely-packed PAC. This was undeniably jarring at times due to lags and discrepancies in pitch between the actors’ voices and their recorded tracks.

Having had under two months to prepare for a one-and-half hour show with barely any experience with musical theatre, the directors had to work with a relatively fresh slate, honing each individual actor’s triple threat skills from scratch.

“The whole thing kind of felt like one big ball of challenges,” said director-duo Megan & Karthika, comprising Megan Sierra Chan (22A13B) and Karthika Warrier (22S06B). “[But] it honestly still hasn’t really sunk in for both of us that it’s over.”

“As a director, I learned to manage my stress better, because you can’t pass that anxiety on to the cast,” Karthika said. As for Megan, she learned to “grow a third ear—one for the cast, one for the crew, and one for the teachers at every rehearsal”.

Despite the many difficulties they were confronted with, the final curtain call lived up to the age-old adage of no pain, no gain. “AVPM was the most euphoric and incredible way to end the term, and the Y6s’ time in Players,” they said.

On top of singing and acting, the dancing was effective in livening up what could otherwise have been a rather static show. The choreography even featured a reference to the beloved Rafflesian sun dance, much to the amusement of the audience.

Overall, despite the limited runway leading to (and eventual limited runtime) of the production, Players most certainly delivered, as evidenced by the numerous positive audience responses.

Their efforts were met with thunderous applause and showers of flowers (or in Ron’s case, broccoli) from the audience as the curtains closed. Clarice Chee (22A01B) reflected that “honestly it was really smart of [Raffles Players] to choose a musical, especially AVPM, because school is already sad enough—people want to watch fun things!”

“[The production was a] very entertaining and outstanding effort given the fact that for the past few years they haven’t been able to do any play so they [did not have] as rich a passing down of knowledge from seniors,” commented Players’ former teacher-in-charge, Mr Jarrod Lee.

Indeed, while A Very Potter Musical lacked the emotional depth of Players’ previous productions (think their self-written play Derailed, or their adaptation of Alfian Sa’at’s Homesick), we felt that it was a true showcase of Players’ comedic potential.

Overall, we thought AVPM lived up to what it had promised its audience—to quote Mrs Nicola Perry, another ex-teacher-in-charge of Players—“a good, fun evening”. Despite the technical mishaps, lack of singing experience and props narrowly flying off the stage, Players delivered an undeniably comic and ultimately heart-warming performance.

If you missed your fill of magical shenanigans, fret not: simply head over here to rewatch the entire thing. And if that’s still not enough, remember to support Raffles Players at their future productions (hint: at the end of the year). 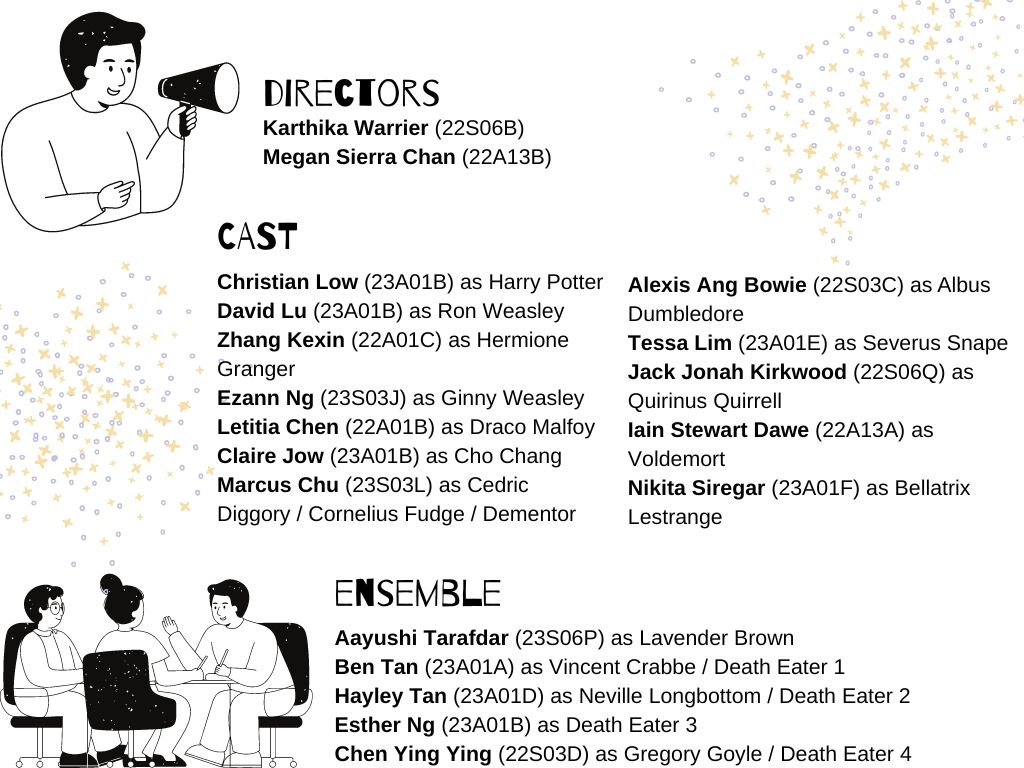 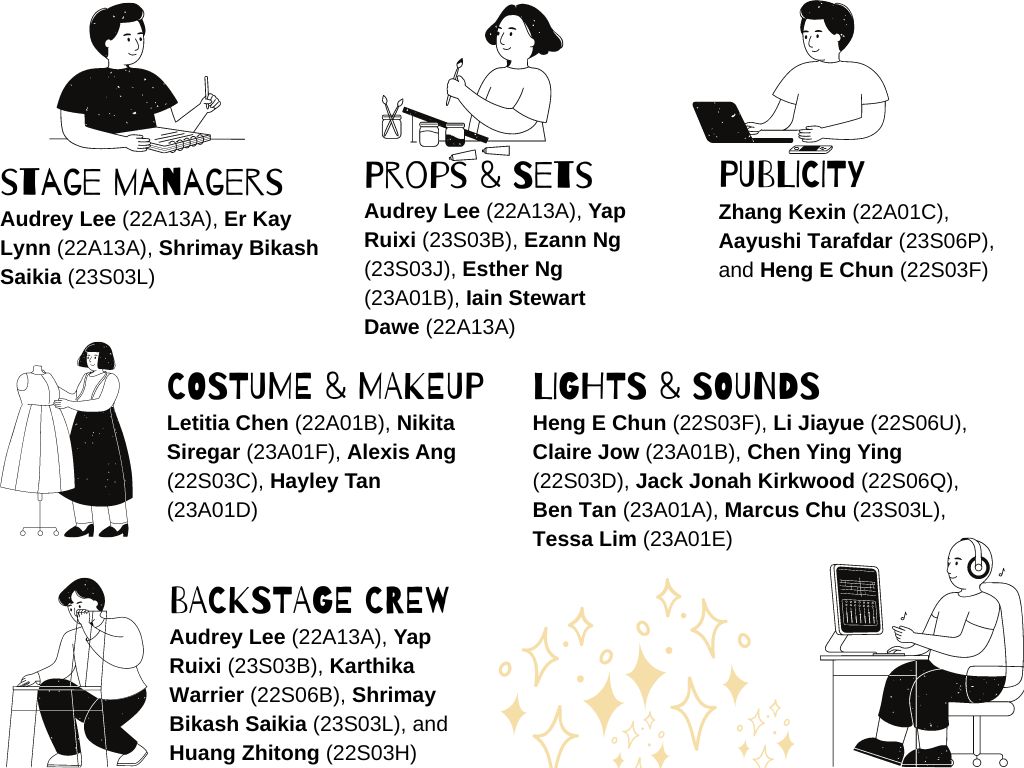